In accordance with the Constitution of the Middle Harbour Yacht Club and complying with the triennial rule, notice is hereby given calling for nominations for the retiring positions for 2020-2021

1a)    In accordance with the Club’s Constitution all Flag Officers (excluding Commodore) for the Club are appointed for a one year period only, and as a result need to nominate for re-election for the following year if desired (up to a maximum of five consecutive years)

1b)    In accordance with the Club’s Constitution and Triennial rule, all Directors are appointed for a three (3) year term at the end of which they either resign, or at their desire can nominate for a further three year term.

2.     Nominations for Flag Officers and Directors shall be made in writing and signed by a proposer and seconder who shall be Financial Adult members [as defined in Article 12(a)], Life Members or Financial Senior Members [as defined in Article 12(d)], and by the nominees who shall be a financial Full, Senior, Sailing or Sailing Under 30 Adult Member of at least two years standing, or a Life Member who shall also sign the nomination form as signifying his/ her consent to the nomination.  [Article 37 refers]

3.     Nominations must be on the appointed form, which is available from the Club and lodged in the Nomination Box located in the MHYC foyer.  The closing date for nominations is 1700 hrs on Friday 4th September. If more than one nomination is received for any position, ballot papers will be issued from or about Monday 14th September and ballot will close at 8.00 pm on Friday 25th September with the result being announced at the Annual General Meeting to be held on Tuesday 29th September 2020.

By order of the Board of Directors:

Work has commenced on lifting the tiles through the breezeway as we continue to improve our club entrance.  Current access to the club is via the ramp to the rigging deck. We appreciate your patience and endeavour to have this work completed as soon as possible.

Help MHYC to achieve our funding goal to replace Sandpiper by making a tax-deductible donation through our account with the Australian Sports Foundation.

To make a tax-deductible donation
Please visit: https://asf.org.au/projects/middle-harbour-yacht-club/ and fill in the online form.
Or click here, download, print and return the form to: This email address is being protected from spambots. You need JavaScript enabled to view it.

Watch the video here to see the winner revealed!

After eighteen of the twenty three races scheduled for the Saturday PHS Inshore Annual Pointscore for 2019-2020 season, the series has been cut short by Covid-19 on 21st March.

While we look forward to the restrictions being lifted and resuming sailing again, here is a wrap up of the various Saturday Inshore Series.

The weather was challenging this season with racing abandoned on 26th October, the 8th & 22nd February.  Due to issues with our start boat, Hugh George, and strong and gusty winds

on the 14th March a decision was made by the Race Committee to use the pump house as the start line and finish at the club house. A reduced fleet braved the tumultuous conditions.

Those that raced enjoyed the day and it proved to be a successful alternative if required.

In Division 1, Rumba’s first race win and then low scoring for the rest of the series was the winning combination for the trio of co-skippers Stephanie Cook, Rob Carr and Kerry Burke,

It came down to the wire for Division 2 in the Summer Series with a tie breaker decider for first and second place. Brett & Ken Churcher took the first place spot on Plan B ahead of

John Crawford’s Innamincka both on 7 points with Waterborne Again (Marc & Oloff Tromp) coming in third. In the J24 One Design fleet, John Crawford on Innamincka was the clear winner

with bullets in all races for a low score of 4. Waterborne Again (Marc & Oloff Tromp) came second with 10 points followed by Vortex (Chris & Graeme Lee) in third on 16 points. 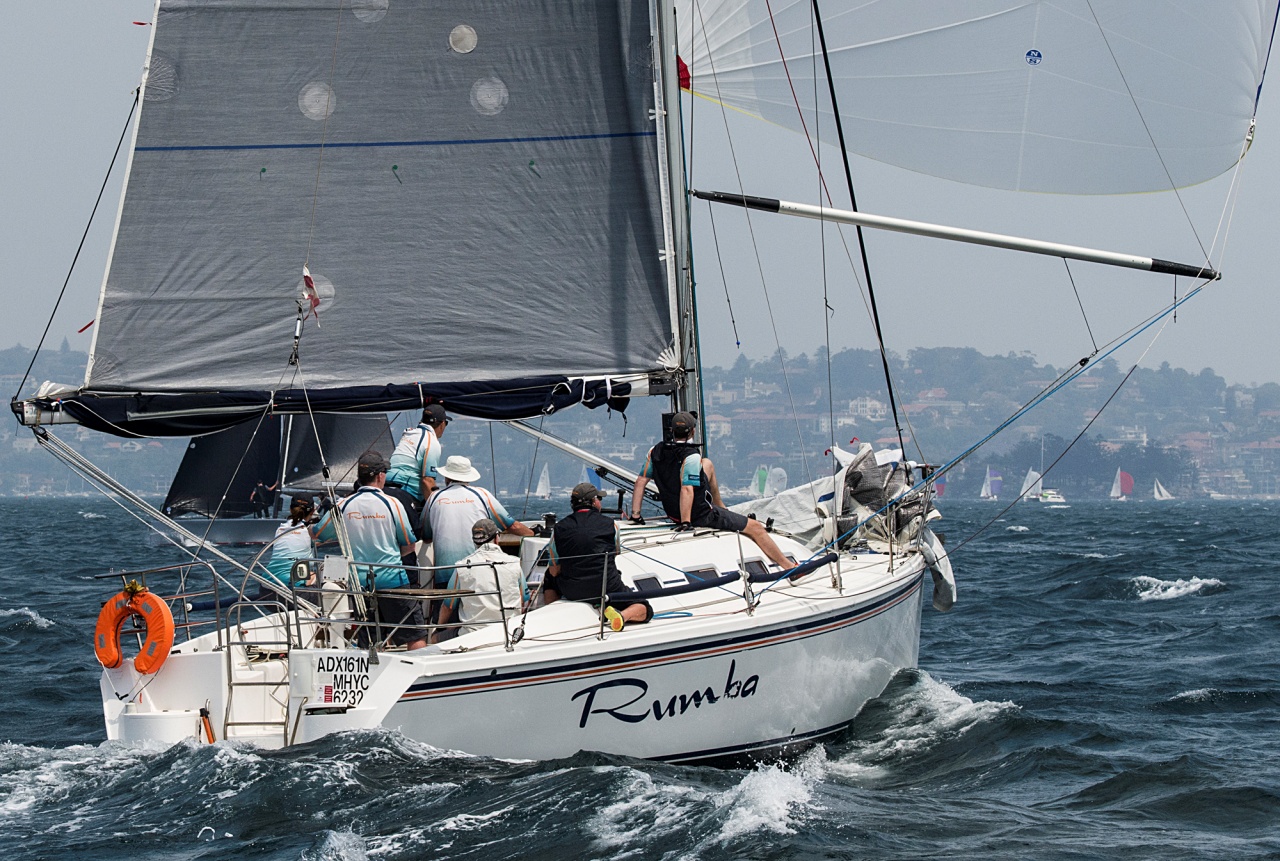 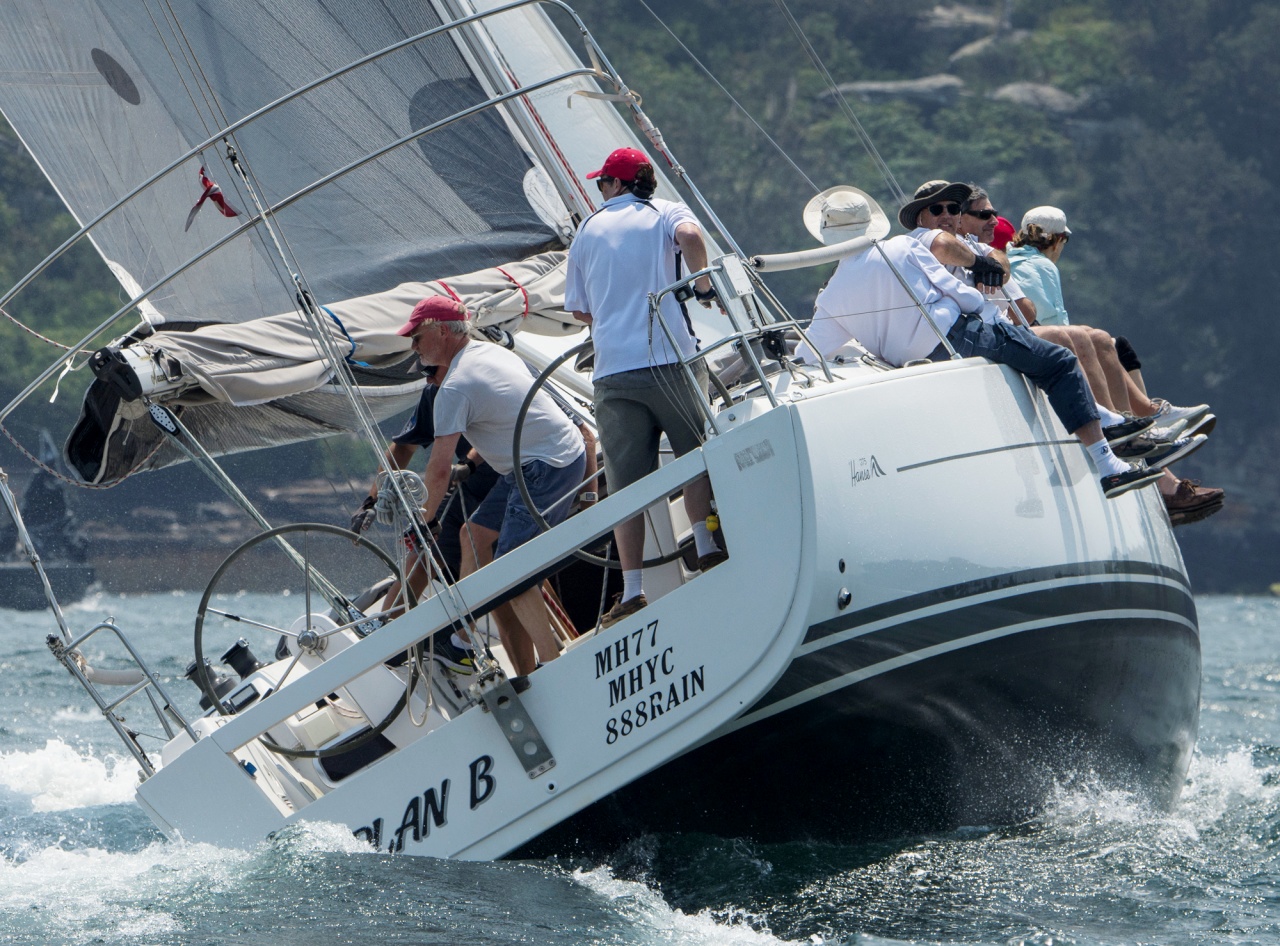 With four wins across the series, Mike Gallagher was the clear winner in PHS Division 1 on Galan with 34 points. It was a tight finish in the minor placings with Rumba (Stephanie Cook and Rob Carr) taking out second place on 41.8 points ahead ofStormaway (Jack Stening and Colin Gunn) on 42.4 points.

In Division 2 it was tight racing amongst the small fleet with Plan B, co-skippered by  Brett and Ken Churcher,  taking out the podium finish on 29 pointsahead of Innamincka’s John Crawford on

In the J24 One Design fleet, Innamincka (John Crawford) was the clear winner ahead of Vortex (Chris and Graeme Lee) and Waterborne Again (Marc & Oloff Tromp) in third. 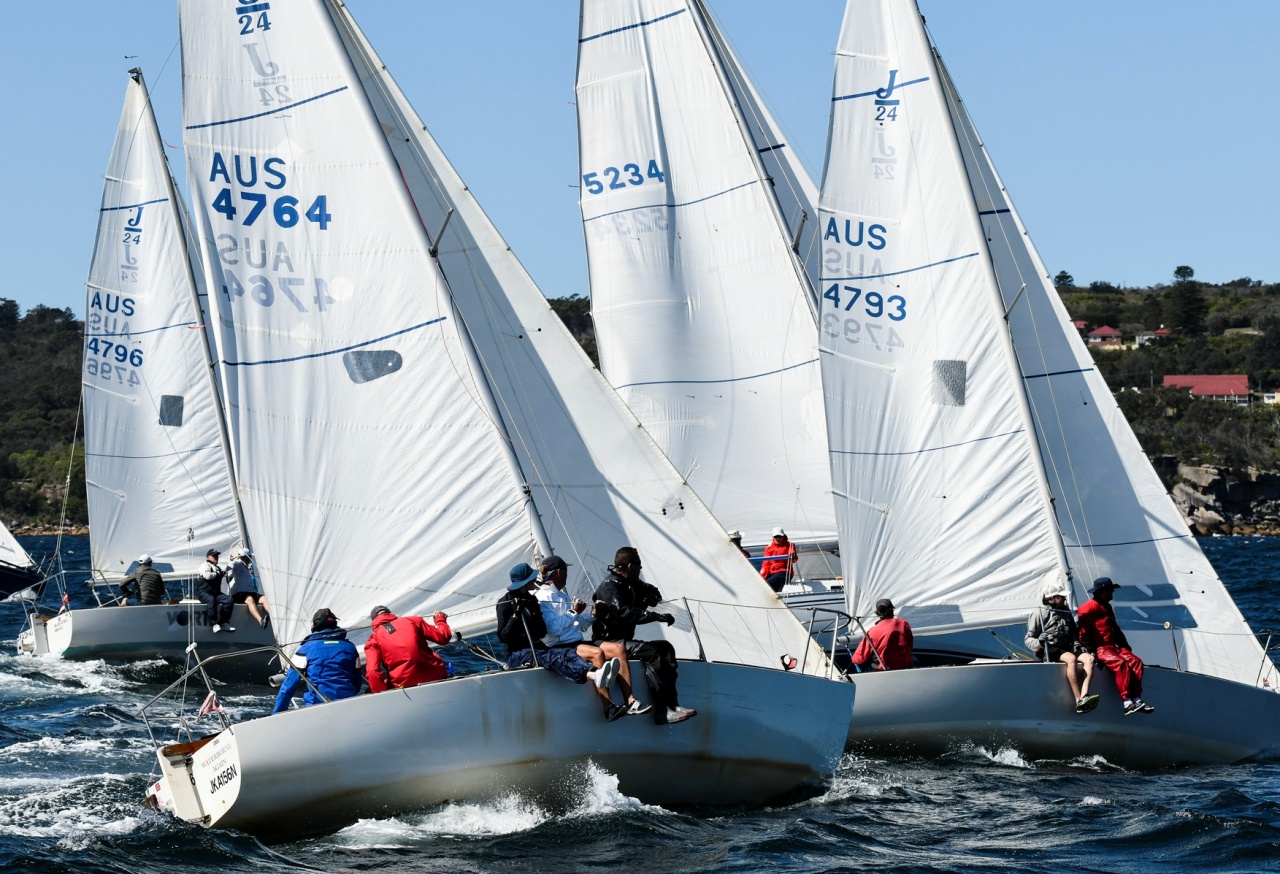 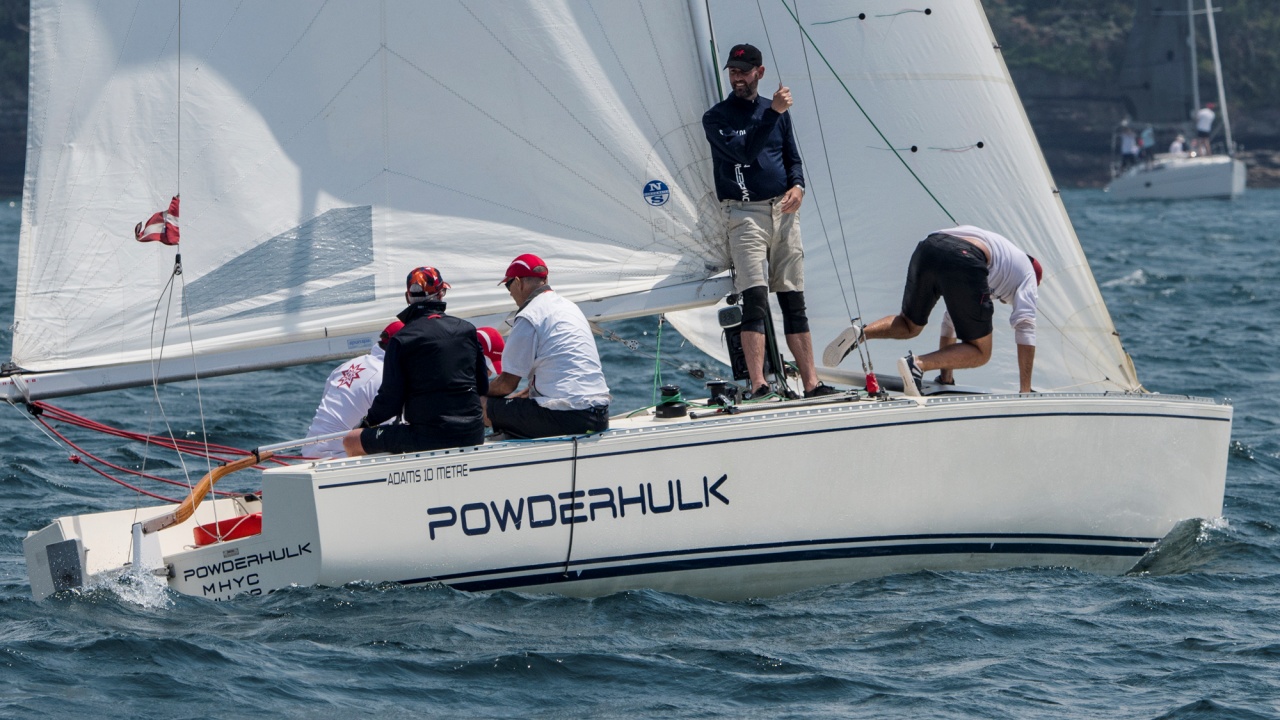 The Sprint Series was keenly contested in both Division 1 and 2 on PHS.  First place going to Stormaway (Jack Stening and Colin Gunn) in Division 1 on 13 points followed by Toy Box 2 (Ian Box)

on 15, one point ahead of Kayimai (Rob Reynolds) in third place. In Division 2, John Crawford took out the series in both PHS and J24 One Design on Innamincka. Dania (Peter Charteris) claimed second place on 14 points and Plan B (Brett & Ken Churcher) was third with 14.5 points in the PHS.  Second place in the OD went to Marc Tromp on Waterborne Again on 12 points and Ace (David West) in third with 14 points.

In the IRC Sprint Series, Stormaway (Jack Stening & Colin Gunn) had the competitive edge getting four bullets to take out the series with 6 points, closely followed by Toy Box 2 on 8 points for second. Third place went to Rob Aldis on Kayimai with 16.5 points. 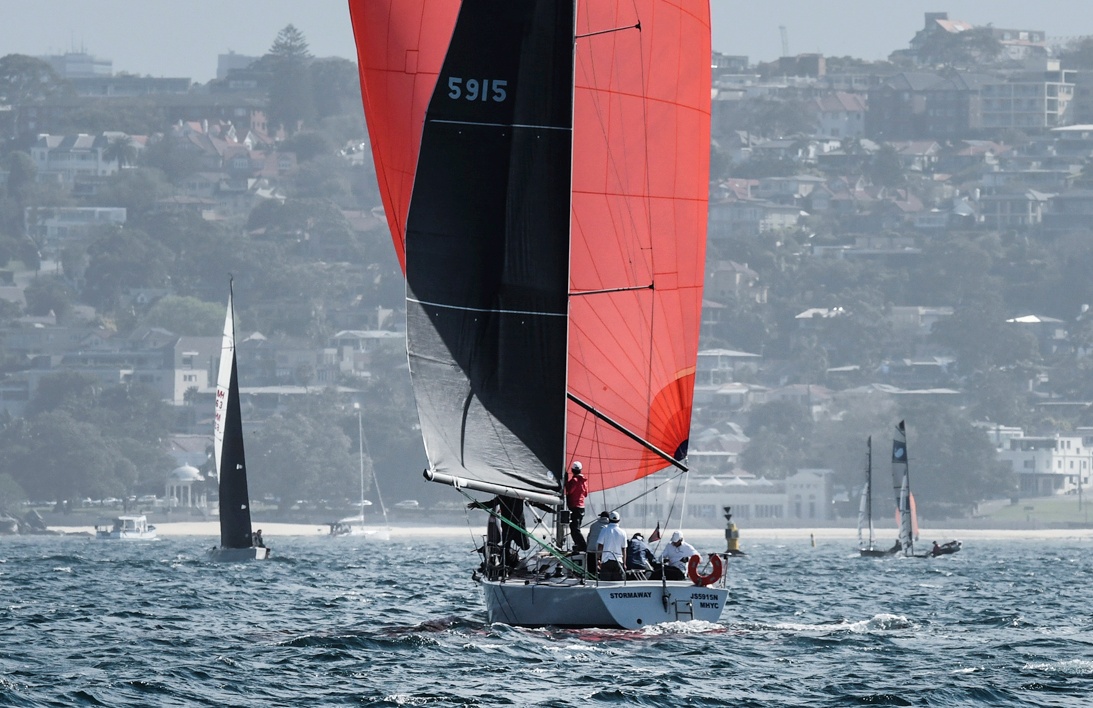 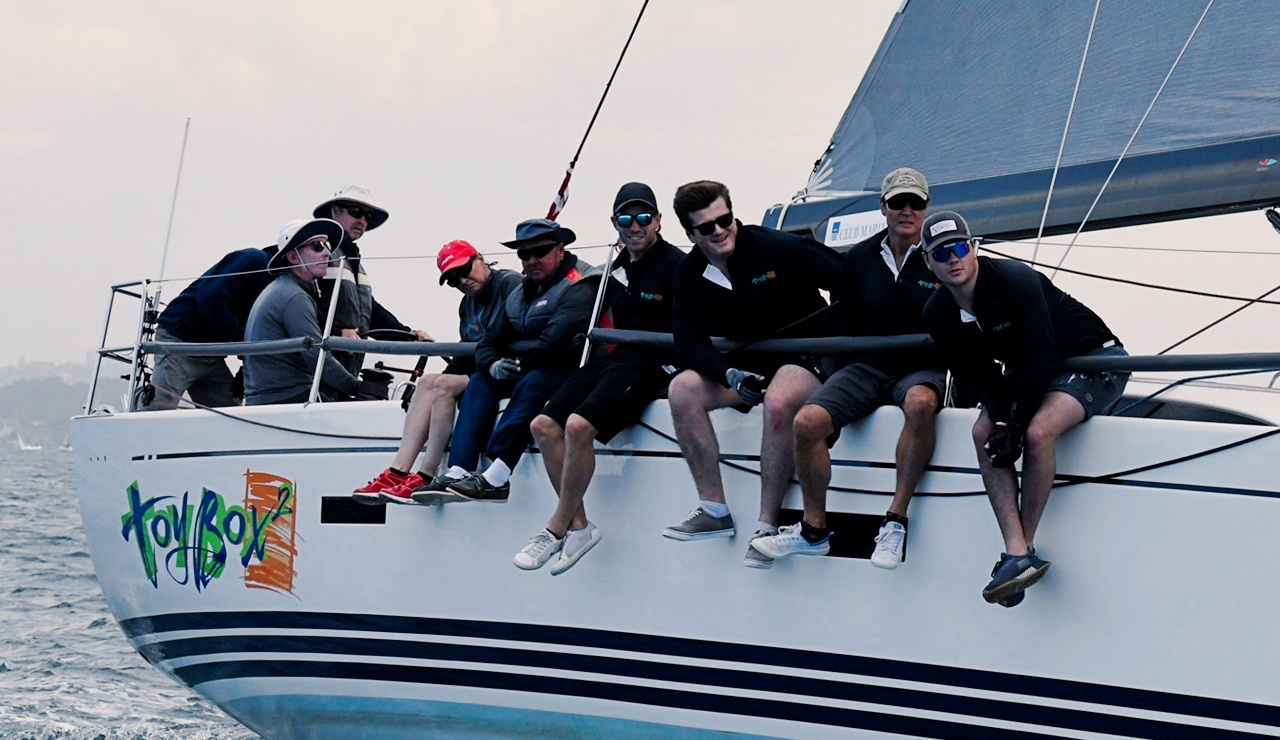 With first places across the twelve races spilt between Stormaway and Toy Box 2 five to four, it was another close result in the IRC Annual Pointscore for the top two positions. Despite a

win for Jack Stening and Colin Gunn on Stormaway in the last race, she was pipped at the post by Ian Box on Toy Box 2 taking out the series on 14 points ahead of Stormaway on 15 points.

Coming in third was Neil Padden on Wailea with 25 points.

Patrick Delaney started strongly in the Adams 10 Summer Pointscore winning the first two races on Powderhulk in the One Design to set the tone for the series.  With two races

abandoned, before the shutdown, he proved impossible to beat on 3 points, also taking out first place in PHS on a countback with 5 points. Second place in OD went to No Friends

(Geoff Charter) on 7 and KickNChase (Anthony Poiner) third with 12 points. Second place for the PHS was No Friends (Geoff Charters) also on 5 points with Contentious (Brian Lees)

out first place in both the One Design and PHS Annual Pointscore Series.  Garth Riley also had a strong performance, claiming second

place in both OD and PHS series on Sirius. Third place in the OD was won by Another Dilemma (Jim Vaughan) and

No Friends (Geoff Charters) in the PHS.

With the strong performance from Powderhulk, their winning streak carried over to the Adams 10 Sprint Series in One Design, winning five of the six races to drop a second.

Only three points separated the top three positions in PHS with No Friends on 9 points, and Sirius and Powderhulk both on 11 points coming into the last race. Sirius finished

strongly with a second in the last race to take out the series on 13 points with No Friends (Geoff Charters) second on 14 and Powderhulk  (Patrick Delaney) third place on 15 points.

Consistency was the key in the Saturday Social Series with Dean Dransfield on Escape committed to the Series winning first place.

MHYC’s Annual Prizegiving, originally scheduled to be held on May 16, has been postponed until the social distancing restrictions

have been lifted.  Until we have the opportunity to come together and celebrate the achievements of all our sailors, congratulations

to all the series winners and placegetters.