Who is Who at the Club - Steve Tucker - MHYC Race Officer 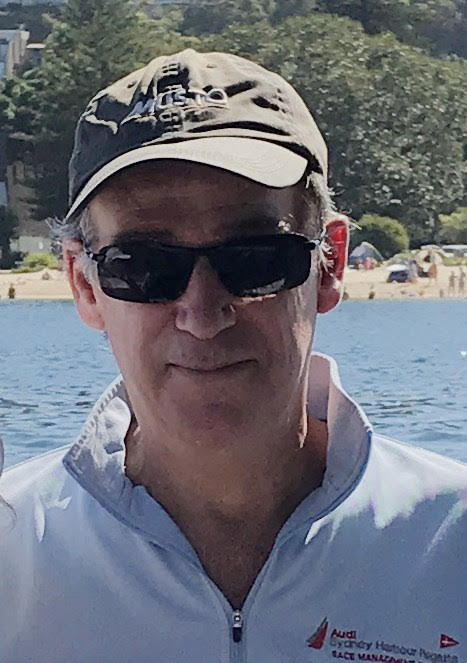 Steve has been a member of MHYC for over 31 years. Most people nowadays best know Steve as one of our smiling Race Officers running the MHYC regular racing events for us. However, Steve has had had a long association with MHYC and over the years has been a volunteer in many roles within our club. Volunteers like Steve keep our club alive! We ask Steve:

Tell us a little about yourself and how you got into sailing and any boats you have owned/ sailed on.

As a kid in the UK, I did a fair amount of sea kayaking. On moving to Sydney I took up windsurfing.  Someone I worked with had a Hobie 16 which we’d trailer up to Brooklyn and sail on the Hawksbury.

I had only ever known one person with a yacht and always assumed sailing was for the rich but out of interest I signed up for a learn to sail course with the Australian Sailing School.  At the time they operated out of the skiff club and that led me to join MHYC in 1990.  I bought my S80 Serious Yahoo II and over the next 10 years I entered practically every event I was eligible to.

What sailing activities do you enjoy participating in at the club?

We used to have half a dozen S80s at the Club, however after the initial excitement I found harbour Pointscore racing faded on me pretty quickly.   I used to enjoy Twilights, and in those days, we used to do the 7-Islands race 2-handed and the S80 was good for that. SASC had a couple of S80s so I did a few of the Daydream Shield events which were boat on boat, very different and a lot of fun.

I did several passage races to Queensland on a Davidson 34 and the NS38 Bear Trap and was lucky enough to skipper Bear Trap north also.

I also used to enjoy the 3-Ports race from the Club to Bundeena and north to Patonga and did some really fun offshore racing on the water-ballasted Mount Gay 30, Shaya-Moya.  For a couple of years, I chartered the Masram 920 TwoCan for the CYCA winter series and I also did a couple of seasons on the CYCA SOPS on that.  As a general statement if it’s not harbour Pointscore racing I quite enjoy it!!

With my race management hat on I enjoy the challenge in second guessing what the conditions are going to be in one, two and three hours’ time and setting a course that’s going to leave the competitors feeling they’ve had a good day.  A lot of that comes from many years of doing it and reading the clues all around you.  I particularly enjoy running SOPS racing where the RO is sitting off Neilson Park and you’re sending the fleet offshore to either the Manly or Bondi circle.

What has been your proudest achievement on water at MHYC?

A couple of years ago, it was a very quiet day, calm and windless and at 12:30 pm we were sitting there wondering what on earth we were going to do.  I was expecting the breeze to come in from the north east, but nothing was happening.  It was a sprints day, so it takes a while to set up, two races to run and competitors were starting to motor around Hugh George expecting a race officer miracle.  Even the flag on St Pats was motionless, this wasn’t looking good.

Then I noticed through the binoculars that the boats moored deep in Manly near the wharf had swung to the north east and to the surprise of the competitors (who likely couldn’t see that) I started to set the course up and by the time 12:55 came we were ready to start.

What has been one of your most memorable/amusing moments being a member of our club?

I forget the year, probably 1998/9 or so.  I was on the General Committee and the Club was in a really dire financial position.  It was so bad that (and I’ll not mention their name) one of the Committee would write a cheque to the Club on a Wednesday to ensure that payroll could be made on a Thursday.

I received a message at work (no mobiles in those days) from Tony Shaw the General Manager to say, “the Club’s going under, can you come down this evening”.  We’d had a Committee meeting a couple of days prior so this must be serious! So, I finished work, went home and grabbed a pile of papers and headed to the Club where I found waves on the beach and Tony standing the breezeway in ankle deep water.  “What’s that lot for …?” he said looking at my pile of papers.  It was a high tide and an east coast low and the Club was awash, boats breaking their mooring lines and the old wooden piles snapping under the loads.  A different sort of ‘going under’.

As a long term member of MHYC, what roles have you undertaken at our club and what were some highlights?

I was first elected to the General Committee in 1996 and was a part of the transition to the current Board / Flag Officer structure, all up a 6 year stint including a year as Treasurer. I chaired the Club's Protest Committee for a number of years during a period where we pretty much sat every Wednesday evening during the sailing season and my logbook records 184 protests including two Rule 69 Misconduct hearings!

During the Sydney Olympics I got a volunteer gig driving press photography boats and being the tragic that I am, each September I generally take the opportunity to wear my volunteer shirt on the water!  Around that time the Club bought a compact video camera and I’d often take a tender out and after sailing we’d run the videos on the big screen and sailors would miss their 10 seconds of glory and buy another round waiting for the replay.

I finished my time on the Board in about 2003 and was re-elected a year later.  I guess my highlights of that whole contribution are introducing the membership smart card which was very controversial but has withstood the test of time.  Also the transition from the old structure of a General Committee to having a Board and a Flag Officers Committee and the package of work I did in rewriting Articles of Association and the subsequent adoption of a Constitution to replace them.  Finally, when we built the current marina, I produced a set of By-Laws around its use which, with a bit of tinkering around the edges, have largely withstood the test of time also.  In 2004 received my first R.B. Cooper Volunteer of the Year award.

I sold the S80 in 2000.  Boatless and looking for something else to do I took up race management under the mentoring of the late John Hurley and with him (and later Brendan and Andrew), I helped run the Twilights for about 10 years.  In 2005 he asked me to help him on the Sydney-Hobart start team, and promptly threw me in the deep end running the competitor checkins which has been my Boxing Day task since.  There's nothing quite like adrenaline of checking in 100+ boats in an hour with helicopters hovering overhead and spectator and media boats buzzing around. He also got me involved in the first Sydney Harbour Regatta and running MHYC's races of the CYCA's Short Ocean Pointscore, two roles I have continued with.  Clubs Need Mentors!

In 2019 I received my second Volunteer of the Year award but for the past three years I've been working in Canberra, so my weekday involvement has fallen by the wayside and I'm limited to running Saturday racing plus the occasional special event as time permits.

What is still on your Bucket list to do/achieve in the yachting world?

I’ve never done Hamilton Island Race Week. Partly because it’s not been possible and partly because I’ve seen some really dodgy owners out there and I’d hate to invest all that time and effort into something and end up frustrated and sticking pins into a plasticine effigy of them.

Maybe I’ll end up chartering a boat, something water-ballasted would be fun, or failing that I’ll try and get a race management gig up there.